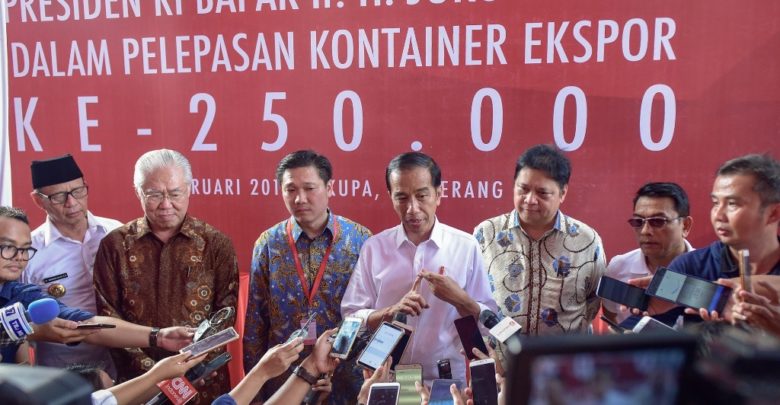 The key to Indonesia’s sound economy are to boost the investment and to encourage the exports, according to President Joko “Jokowi” Widodo. Therefore, President Jokowi has instructed Minister of Trade to make food and beverage industry a priority considering that the subsector grew significantly by 9 percent. “It’s such a significant growth; therefore this industry must be given supports,” President Jokowi told reporters after officiating the shipping of the 250,000th container of publicly listed food manufacturer PT Mayora Indah Tbk for exports, in Cikupa, Tanggerang, Banten, on Monday (18/2). The President cited an example of the Government’s support by sending a team to negotiate with the Philippines Government when the country took safeguards measures to certain export product including those from Mayora Group. The President added the Government has also simplified regulations regarding exports, adding that policies to ease investment are also implemented particularly on export goods and products, as well as import substitution products to improve Indonesia’s trade balance and current account. “It all leads to that goal. We will also improve areas that need to be fixed,” President Jokowi said, adding that exports must also be accelerated. On that occasion, the Head of State also expressed appreciation to Mayora whose products have been exported to more than 100 countries including to Asia, ASEAN, Latin America, Africa, the European Union, and the United States. The President also said he was glad that the exported goods use products from local farmers. “This is what we expect; local products with export orientation. For the record, Mayora Group’s export sales are quite big. The company has set a target of exporting two thousand containers per month,” the President said. (DND/AGG/ES) Translated by : Rany Anjany Subachrum Edited by : Muhardi Proofread by : M. Ersan Pamungkas Source: setkab.go.id